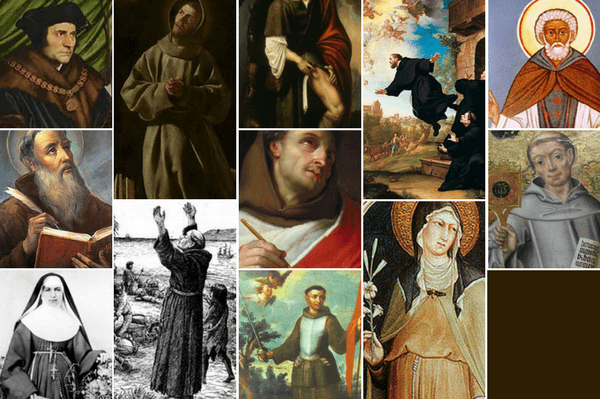 When Jesus famously appeared to Saint Francis in the dilapidated and falling down church of San Damiano and told him to “rebuild My Church”, the humble Friar from Assisi took it both literally and figuratively. After getting approval from his Bishop to act on the vision, Francis then went back to San Damiano and rebuilt the church with his own hands. But in the years after, his preaching led to another kind of rebuilding of the Church. He preached a devout adherence to the way of Christ, in simplicity, love, and action.

Soon he began to attract followers, and eventually founded the Order of Friars Minor, better known as the Franciscans. The members of this order continued Francis’ mission of rebuilding the Church throughout the centuries. A many great saints, besides Saint Francis, have come from the Order. Here are 12 Franciscan Saints you should know about:

Saint Joseph of Cupertino – He was not educated or, frankly, very smart. He was known as very slow-witted and couldn’t learn a trade because of his deficiencies. But beginning as a young child, he saw visions and had ecstasies. His most famous being that he would levitate – sometimes even during Mass. Ironically, being that he was unintelligent, he is the patron saint of students taking tests.

Saint Lawrence of Brindisi – He was a gifted scholar who spoke dozens of languages and his powerful writings were a major influence in the Counter-Reformation. He was declared a Doctor of the Church by Pope Saint John XXIII.

Saint Benedict The Moor – He was the son of former slaves, taken from Africa. Despite being publicly ridiculed for his skin color, he accepted the insults with patience and dignity. He was extremely generous to the poor, was known as a healer, and was sought out for his deep, intuitive understanding of theology and Scripture. However, late in life, despite having gained rank and reputation, he chose humble kitchen duty as his daily work, as he enjoyed cooking for others.

Saint Bonaventure – One the greatest medieval theologians and philosophers, ranking with Thomas Aquinas himself, his writings are one of the greatest treasures of Church Theology. He was made a Doctor of the Church, and is known as the Seraphic Doctor.

Saint Clare of Assisi – She was one of Francis’ first followers. She was the daughter of a rich and powerful Count who owned large tracts of land and castles. After hearing Francis preach, she cut of all her hair, traded her luxurious gowns for simple robes and a veil. Her father wanted to marry her off to another rich family, but she refused all attempts, saying Christ was her only spouse, even clinging to a Church altar when her Father’s men attempted to forcibly drag her from the Church to marry. She is the foundress of the female counterpart to the Franciscans, the Poor Clares.

Saint Marianne Cope – She, along with 6 others sisters, moved to the remote Hawaiian leper colony of Molokai, along with Saint Damien of Moloka’i to care for the outcast and dying lepers there. Despite being in direct contact with patients of the highly infectious disease for many years, she never contracted the illness.

Saint Thomas More – The Lord Chancellor of England and martyr, who famously confronted King Henry VIII about the King’s divorce, was a member of the Third Order of the Franciscans. He is the patron saint of lawyers and politicians.

Saint Bernardino of Siena – A great preacher and reformer, his efforts to address the evils of the day and revive piety on the Italian peninsula during the 15th century have earned him the name “The Apostle of Italy”. He is the patron saint of marketers.

Saint Anthony of Padua – He was known for his devotion to the Infant Jesus and was noted by his contemporaries to be forceful when preaching, to have expert knowledge of scripture and undying love and devotion to the poor and the sick. He was proclaimed a Doctor of the Church by Pope Pius XII. He is the patron saint of lost things.

Saint Roch – Born into a wealthy family, he gave his inheritance to the poor and joined the Franciscans and cared for victims of the plague. He was born with a reddish cross birthmark on his chest that grew proportionately with him as he aged. He was once falsely accused of being a spy and imprisoned and died in jail. He is the patron saint of dogs and the falsely accused.

Saint John of Capistrano – In his lifetime, he was a famous as a preacher, theologian, and he earned himself the nickname ‘the Soldier Saint’ when in 1456, at age 70, wearing armor over his Franciscan robes, the old and frail friar actually led his own contingent into battle against the invading Turkish forces at the Siege of Belgrade.