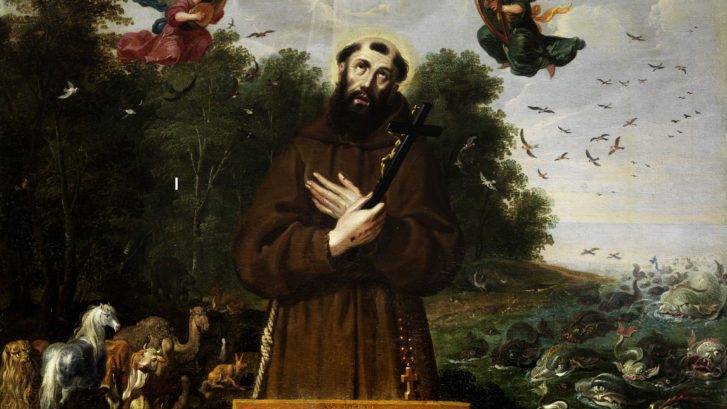 When most people think about Saint Francis, one of the first images that come to mind is the ubiquitous Saint Francis garden statue; peaceful and serene and gently holding animals in his hands. But the real Saint Francis was so much more interesting than that. He was an ex-party animal soldier who renounced his wealth, lived his new life in radical poverty, went on daring missions to hostile lands, and experienced mystical ecstasy.

Here are 7 fascinating fact from the life of Saint Francis:

1.  His Name Was Originally John
At his birth in 1182, his mother had Saint Francis baptized John (Giovanni), after St. John the Baptist. However, when his father, a rich cloth merchant names Pietro di Bernardon, returned from business travels, he renamed him Francis (Francesco) because France was where he made his livelihood.

2. He Was A Party Animal
Before his conversion, Francis, who was wealthy and good looking, lead a life full of partying and frivolity . His partying buddies even called him “dominus”, because he was the King of Partying, paying for lavish parties full of food, wine, and women.

3. He Wanted To Be A Warrior Like King Arthur
Francis was enamored with the Arthurian legends of France, and desired to be knight in the same vein. Francis even fought in two wars, one a civil war in Assisi, and the other as a mounted soldier against the city-state of Perugia. In the second battle, he was captured and was a POW for over a year.

4. He Traveled Into Muslim Territory To Convert The Sultan
During the 5th Crusade, Francis traveled to Egypt to convert the Sultan Malik al-Kamil. He even challenged the Islamic religious leaders to a trial by fire where he would walk through fire with them to prove the truth of Christianity. Though the Sultan did not convert, Francis and Sultan became true friends, and ten years later, al-Kamil freely gave Jerusalem to the Christians.

5. He Was The First Record Person To Receive The Stigmata
During a 40-day retreat, dedicated to the Archangel Michael, he had a vision of a six-winged Seraph attached to a cross. He miraculously received at the same time a painful wound of the heart, which seemed to pierce it. When the vision ended his own hands and feet bore the marks of the angelic crucifixion which he had seen in the vision.

6. His Grave Was Lost For Many Years
Saint Francis died on October 3, 1226. His body was originally placed in a Basilica, but not long after, out of fear that it would be lost in raids by invading Saracens, his body was hidden. The secret location was forgotten and not rediscovered until 1818.

7. The Franciscans Got Papal Approval After Innocent III Had A Vision
Francis’ biographer, Saint Bonaventure, recounts that Pope Innocent III had a dream in which he saw “the Lateran basilica almost ready to fall down. A little poor man, small and scorned, was propping it up with his own back bent so that it would not fall. “I’m sure,” he said, “he is the one who will hold up Christ’s Church by what he does and what he teaches.”

After having this dream, Innocent III approved the rule of Francis and the founding of the Franciscan order.